Below are some tangible examples of what healthy cities that incorporate biomimicry will look like. 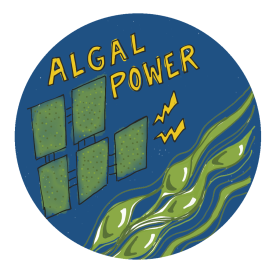 Algae power is a rather unheard of phenomena, but one prototype building in Hamburg, Germany has shown that it is possible and a viable piece in the puzzle of developing a carbon-neutral future for the world. The basis of algae power lies in the natural process of photosynthesis, and CO2 (as well as other nutrients) is a key components of this reaction. How the building in Germany functions is that there are 129 panels (.78 meters thick) along the outside of the building (they cover 200 square meters), that are filled with algae and filled with CO2 and nutrients. Then when the sunlight hits the panels, photosynthesis causes the microorganisms to multiply and give off heat (the water goes to about 40 degrees C). The warmth is then captured for heating water or storing in saline tanks underground, while algae biomass is harvested and dried. It can either be converted to biogas, or used in secondary pharmaceutical and food products.

Solar panels power the pumps and heat exchangers, so ideally the building will not release any CO2 emissions (although additional energy input was needed at the time the article was published). Another benefit of the algae is that they naturally provide shade to the inhabitants of the building as they absorb sunlight (another example of the multifunctionality that comes with mimicking natural systems). This building shows the viability of algae power as a source of energy for buildings throughout cities (from apartments to office buildings) as it uses the foundational process (photosynthesis) of nature to produce energy and biomass that can be converted into biofuel.

Multi-function spaces, as the name would suppose, are places that spark integration of different activities and interactions. The High Line in New York City, for example, is a multi-function space that integrates nature, public art, community space, and local vendors. In Copenhagen, Skolen i Sydhaven serves primarily as a school (private space), but also as a community meeting space and entertainment space for the local community (public space).  There is a serious need for creating more multi-function spaces in cities because they foster community development and strengthen community resiliency. Of late, particular emphasis has been placed on the need for multi-functional spaces that house the often isolated communities among us, like the sick and the elderly.

The general tendency when people get older is to put them into assisted living or nursing homes that are too often isolated from the greater community at large. This social isolation from the rest of the world is not beneficial for the health of senior citizens. Nature doesn’t isolate it’s sick, but instead senses and provides support to the needy. Through the development of multi-functional spaces for senior citizens, we could emulate nature in order to strengthen community. The development of these senior living communities starts with locality, meaning these spaces should be built close to town or city centers – to foster increased interaction with young folks – and take advantage of the natural resources that surround them. These spaces should incorporate flex spaces into the buildings so they could be used to hold community events or performances. Like John Thackara talks about in his book, In the Bubble: Designing for a Complex World, the designing of senior living is really ‘designing for our future selves’, so why isolate ourselves when we instead could remain part of the greater community in our elderly years?

“1.3 billion tons of food is wasted every year”, “Food waste in Europe alone could feed 200 million hungry people” Facts like these (from the global organization, Food Tank) demonstrate the brevity and global scope of the complex issue of food waste. In developing regions of the world, structural issues like lack of proper technology and infrastructure are the reasons for the majority of food waste, while in more developed regions, food waste is linked largely with household and commercial food sector waste. While certain governmental protocols often make it difficult for consumers and restaurants alike to use food that is deemed passed its ‘expiration date’, several entrepreneurs have learned how to both profit off of the waste (as is the case with YourLocal and Too Good to Go) and train people with ‘high barriers to employment’ to use wasted food in their culinary careers.

YourLocal and Too Good to Go are both Copenhagen apps that are tackling the issue of food waste in the city and beyond. Both of these apps are based on the same premise: offering excess food from restaurants and local food stores at a discounted price to app users. At the end of the day when restaurants and local food shops have food that would otherwise be discarded, this food is listed on the apps for consumers to browse and purchase. In this way, the apps are killing two birds with one stone: aiding in the fight against food waste by getting consumers to purchase and eat food that would otherwise have been wasted and allowing the restaurants to gain additional profit instead of losing money in the form of wasted food.

Food waste is not just a means of obtaining profit for private entities, but is being used to fight the global hunger crisis. In the United States alone, “40 million people struggle with hunger, including more than 12 million children.” (FeedingAmerica) This juxtaposes quite starkly with the fact that the US also wastes forty percent of its food (Natural Resources Defence Council).  Several initiatives have been developed to bridge this gap around the world, including soup kitchens and the creation of secondhand supermarkets – like WeFood in Copenhagen, that collects excess food that would otherwise have been discarded by larger supermarkets. DC Kitchen in Washington, DC is a progressive example of how food waste can be used as an asset to combat the overarching issues of lack of access to healthy food and high unemployment among certain populations in the DC area. This community kitchen targets the root cause of hunger – poverty – by offering training for culinary careers, and good living wage jobs. Part of their mission is to recover as much waste food as possible, and buy local produce to use in their culinary training and cooking for community meals. This example demonstrates the viability of multidimensional solutions to combating the issue of food waste that ultimately lead to a better healthier solution for all.

Traditional methods of agriculture ignore the lessons of nature in a big way. Our current conventional method of getting produce into cities involves shipping produce from massive plots of cleared land that is cultivated in monocultures and fed by massive amounts of fertilizer. This is not only incredibly inefficient, but it also wastes a huge amount of space and resources while increasing the vulnerability of the land (Despomonnier, 2017).

Vertical farming employs methods of stacking and hanging plants combined with light technology to produce more food in the same amount of acreage as a 2-D field while operating on a virtually closed loop of water supply. This method aims to reuse as much material as possible and take agricultural supplements such as pesticides and synthetic fertilizers out of the equation by practicing no till farming and using municipal waste to create a base for organic fertilizers. As this practice is designed to be used in cities, once food is produced it is in direct proximity to its buyers. A grocery store could even be built on the bottom floor of a vertical farming facility, eliminating the need for shipping entirely (Caine).

Not only is this system incredibly efficient, it is also extremely resilient. Farming indoors greatly decreases the risk of losing time and resources to natural disasters which are becoming more and more frequent due to climate change. Furthermore, because variables can be carefully controlled in an indoor environment multiple microbiomes can be established, thereby enhancing a city’s biodiversity far beyond what would otherwise be possible (Caine).

How Do We Start?

We start today! We start wherever we can. We make these changes in our homes, our schools, our communities, our cities. If we keep prioritizing health in the way we design our lives, and look to nature to do so, we will work up to these big scale changes that will turn our cities into solutions.

Facts About Hunger and Poverty in America. (2018). Retrieved November 29, 2018, from https://www.feedingamerica.org/hunger-in-america/facts

Nink, E. (2015, May). 10 Facts You Might Not Know About Food Waste. Retrieved November 29, 2018, from https://www.crcresearch.org/solutions-agenda/multi-functional-spaces